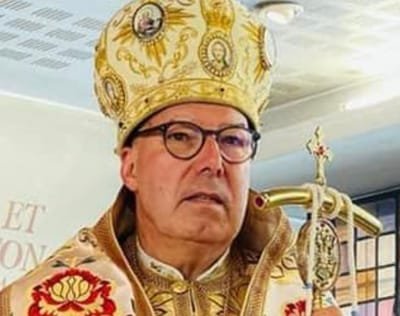 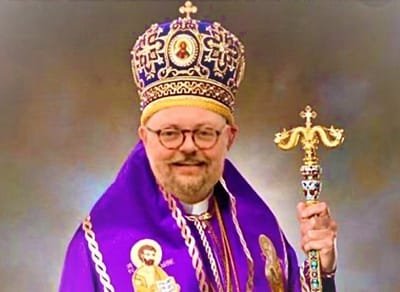 His All Holiness  Nicholas,
Patriarch of the Orthodox Patriarchate of Nations.

His theological studies were taken at the Institute Saint Sarge in Paris. He was consecrated to the episcopate on September 1, 2001 as Bishop of Paris in charge of missions, he entered the Ukrainian Church in exile, in the United States, and in 2003 he was elevated o the rank of Archbishop. In 2005, he served as chief consecrator for the solemn consecration of Patriarch Moses in Saint Sophia Cathedral in Kyiv. Along with the Western Bishops, he left the Kyiv Patriarchate in 2006 to enter into a relationship with the American Orthodox Catholic Church in the United States.

Obtaining the status of autocephalous, he became Archbishop Primate of the Synod in 2007. On October 9, 2001, he was elected and consecrated Patriarch by the twenty one Bishops of the Holy Synod.

The Church has now adopted the name Autocephalous Orthodox Church in Europe. Many other Bishops had then joined the Church and at the 2014 General Synod in Italy, the Church, now present on five continents, took the name of Orthodox Patriarchate of Nations, thus signifying it’s catholicity and affirming its global presence.

The Orthodox Patriarchate of Nations currently has more than a hundred Bishops who represent it throughout the world.

The Most Rev. George,
Archbishop of London, Metropolitan of Great Britain & Arabic Diaspora.

The Most Reverend Archbishop Metropolitan George read Theology in the USA where he attained a Master Degree in Divinity. He also holds a Master Degree in Business Administration from Cornell University as well as and a Doctorate Degree in Eastern Theology. On the 22nd of April 1991, on the Vigil of the feast of Saint George the Great Martyr, he formally took the monastic vows in accordance to the Eastern Rite Tradition. On the 23rd of April 1991 at the Divine Liturgy, he was ordained to the Holy Deaconate. On the 23rd of April 1992, he was ordained to the Holy Priesthood. In June 1995, he was consecrated to the episcopate.

Archbishop Metropolitan George founded The Companions of Christ Orthodox Catholic Mission in 2005. The Mission is dedicated to Charity Work and the national and international exchange of knowledge within the context of the Orthodox tradition.

H.E. Lived and worked in the Middle East, USA, Asia, Africa and Europe. He had the opportunity to work closely with many International Humanitarian Organizations and was successful in the many projects he was overseeing.


In 2016, after spending three years in Central Equatoria and East Africa where he worked closely with refugees camps, orphanages and field hospitals, Archbishop Metropolitan George moved to the United Kingdom to continue the mission.

On October 2021, Archbishop Metropolitan George was received into the Orthodox Patriarchate of Nations by the blessing of His Holiness Patriarch Nicholas. He was elevated to the rank of Archbishop of London  Metropolitan of  Great Britain & Arabic Diaspora.